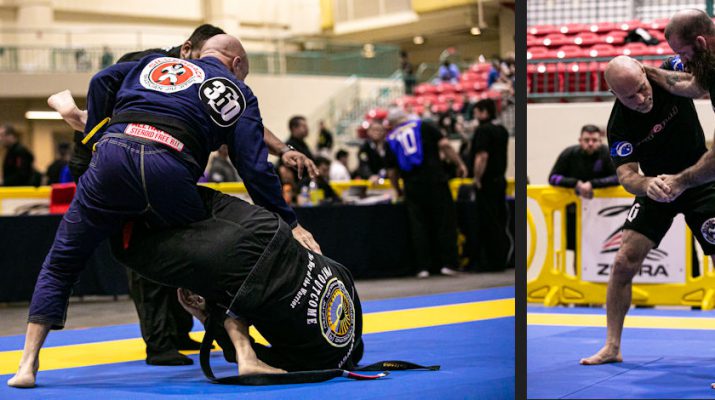 The last time that I competed was the IBJJF Master Worlds in December of 2020. I received my black belt in May 2021, three weeks into an injury that kept me out for over three months! It was like buying a brand new Corvette, but not being allowed to drive it. I wanted to pick up an IBJJF tournament as soon as I was ready to compete again. The IBJJF Pans were one month earlier, but too soon for me. So, I traveled to North Carolina to compete in the Charlotte open. Master 6 had three competitors signed up, including myself. After a guard pull and very heavy pressure from my opponent as he attempted to pass for most of the match, he had received one advantage point before I was finally able to get out and attempt a sweep or pass. But as I stood, he went to a single leg X position and placed his outside leg way past my center-line, in fact past my entire body. The official notice the reaping violation, stopped the matched, and disqualified my opponent for the penalty. So, my inaugural match at black belt resulted in a win, but not in a manner that I would have preferred. I felt bad for my opponent because I don’t believe he did it on purpose. It was probably due to the intensity of the match.

In the IBJJF, a three man bracket sends the loser of the first match to compete against the third man. The winner of that match then takes on the winner of the first match in the championship. The third man won that match versus the loser. So he and I fought the final against each other. After some time he pulled guard and attacks grips continuously. I spent most of my time breaking those grips and made a few attempts at breaking and passing his guard. In the end the score was all zeroes for both of us and a referee’s decision had to decide it. He rightly chose my opponent as the victor as his grips attacks outweighed my break and pass attempts.

My first bracket at black belt resulted in a second place. Welcome to the deeper ocean that is black belt. Time to sign up for the open division, also known as the absolute.

Jiu-Jitsu is often referred to as a chess match. You think about strategy and a number of moves ahead of the current situation. I had to address a few things that I noticed during my first match with this man. I still had a very tough match, but in the end I was able to score the only points of the match and take my first gold as a black belt!

Since the tournament was holding the no-gi tournament later the same day, I signed up for it as well. I had to drop down to the Master 4 age group in order to get some matches. Two other people signed up for the heavyweight division, but one never showed up. So it was one match for the championship. I lost via a guillotine choke. On to the open division.

Four men signed up for the open division. The first match was against the opponent that I had just lost to at heavyweight. Again, I made some adjustments and was able to achieve a victory by points. The championship match was against the thickly bearded man pictured above. We had a good back and forth scrap on our feet. He smoothly entered a Darce choke during one of the throw counters, to which I eventually tapped.

It was a good day full of tough matches with great competitors. Black belt is definitely a division where the margin for error is very small. I am very thankful to be able to compete at this level. The journey continues… 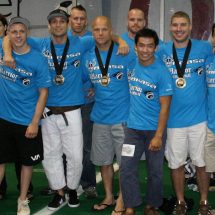 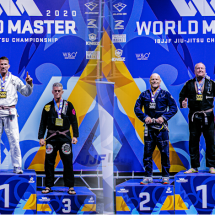